Stage 11 : Car 1 completes the Shubaytah dunes, the toughest section of the event. Maintains its 10th place position upon its return to Haradh. 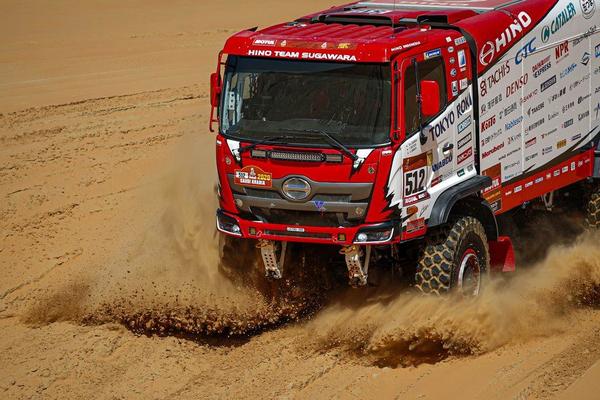 With the moist and heavy sands behind it, Car 1 picks up its pace again.

On Jan 16, the latter half of the marathon stage took contestants on their return trip from Shubaytah in the southeastern part of Saudi Arabia to Haradh. The 379 km SS (timed section) featured an endless expanse of highly challenging dunes, making this the toughest stage of the event. HINO TEAM SUGAWARA's Car 1 (HINO500 Series) crewed by Teruhito Sugawara/Hirokazu Somemiya/Yuji Mochizuki delivered impressive performance, finishing the SS at 13th place overall in the trucks category to maintain their 10th place position in general rankings overall.

Situated in the southeastern part of the country near the UAE (United Arab Emirates) border, the areas near Shubaytah were covered with clusters of massive and high dunes. The SS, which started after a 45 km liaison out of the bivouac, met contestants with an endless expanse of difficult dunes for 77 km, followed by less challenging dunes up to the 114 km point. Although what came next were hard unpaved surfaces, the segment also featured sections covered with sand as well as small dunes. In the final section of the stage, contestants raced to the finish line on sandy off road terrain where they were able to pick up speed. This was followed by a 320 km liaison that took them back to the bivouac in Haradh, making this a long stage with a total driving distance of 746 km.

Car 1, whose forte is on dunes, boldly challenged the dune stage, but with the sand made heavy from rainfall the area received a few days earlier, particularly in the first parts of the stage, the Car 1 crew was not able to pick up their pace as much as they would have liked. Still, the crew continued to push as much as road conditions would allow them to and finished at 13th place in the overall trucks category. Even though Shubaytah was a marathon bivouac―which meant that this was the second day of driving without receiving any servicing from their mechanics― the truck made it back without any problems. The truck finished without getting stuck or puncturing any tires along the way either.

Jan 17 is the last day of the rally. After reaching Qiddiya on an SS and liaison totaling 374 km, contestants will race the "Qiddiya GP"―their final 20 km SS raced in the style of a victory run―in front of a crowd gathered at the award ceremonies area. Teams will not be letting their guards down, however, as there is always the risk of mishaps occurring before the finish line that could force them to retire. HINO TEAM SUGAWARA performed their final inspections and servicing at the Haradh bivouac.

Teruhito Sugawara (Driver, Car 1)
We were up against a stop-and-go variety of dune crossings again today and there were also areas where the sand was heavy, so all of this made it difficult for us to pick up our pace. We're not doing bad time-wise compared to the leading pack, but I'm a bit disappointed with our ranking.

Hirokazu Somemiya (Navigator, Car 1)
Navigation went smoothly today as the ruts were still clear on the ground thanks to the tightly packed sand. We will stay on our toes for one more day and do our best.

Yuji Mochizuki (Navigator, Car 1)
The adjustments we made on our turbocharger went fine and we had a trouble-free day. A routine inspection was all the truck needed last night at the marathon bivouac. It's heartbreaking to think that this is all going to be over a day from now. 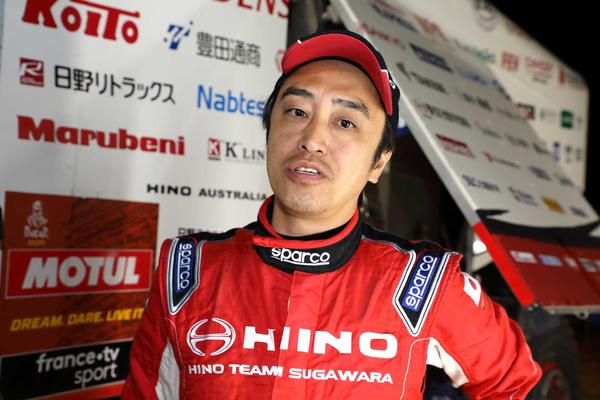 Driver Teruhito Sugawara looks back on the marathon stage. 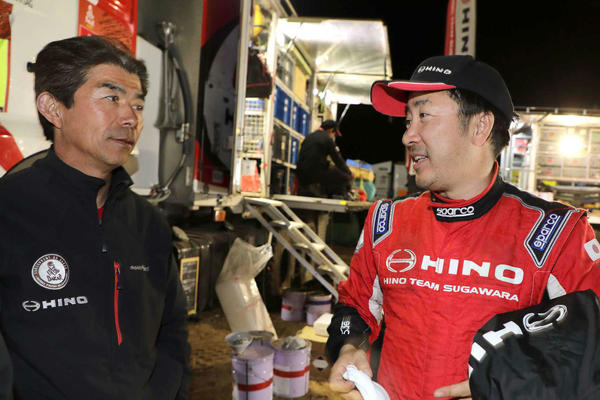 Navigator Yuji Mochizuki explains how the truck is doing to mechanics. 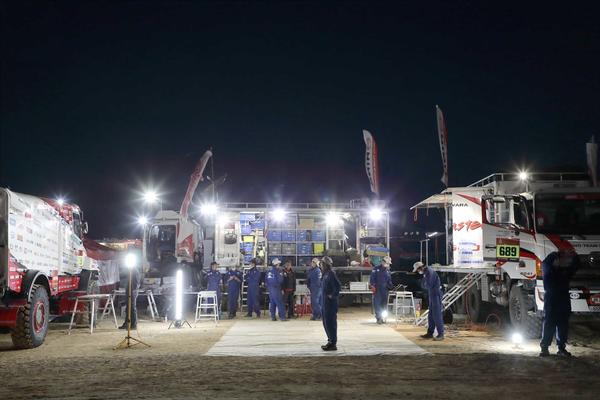 The team waits for Car 1 to return at the Haradh bivouac. 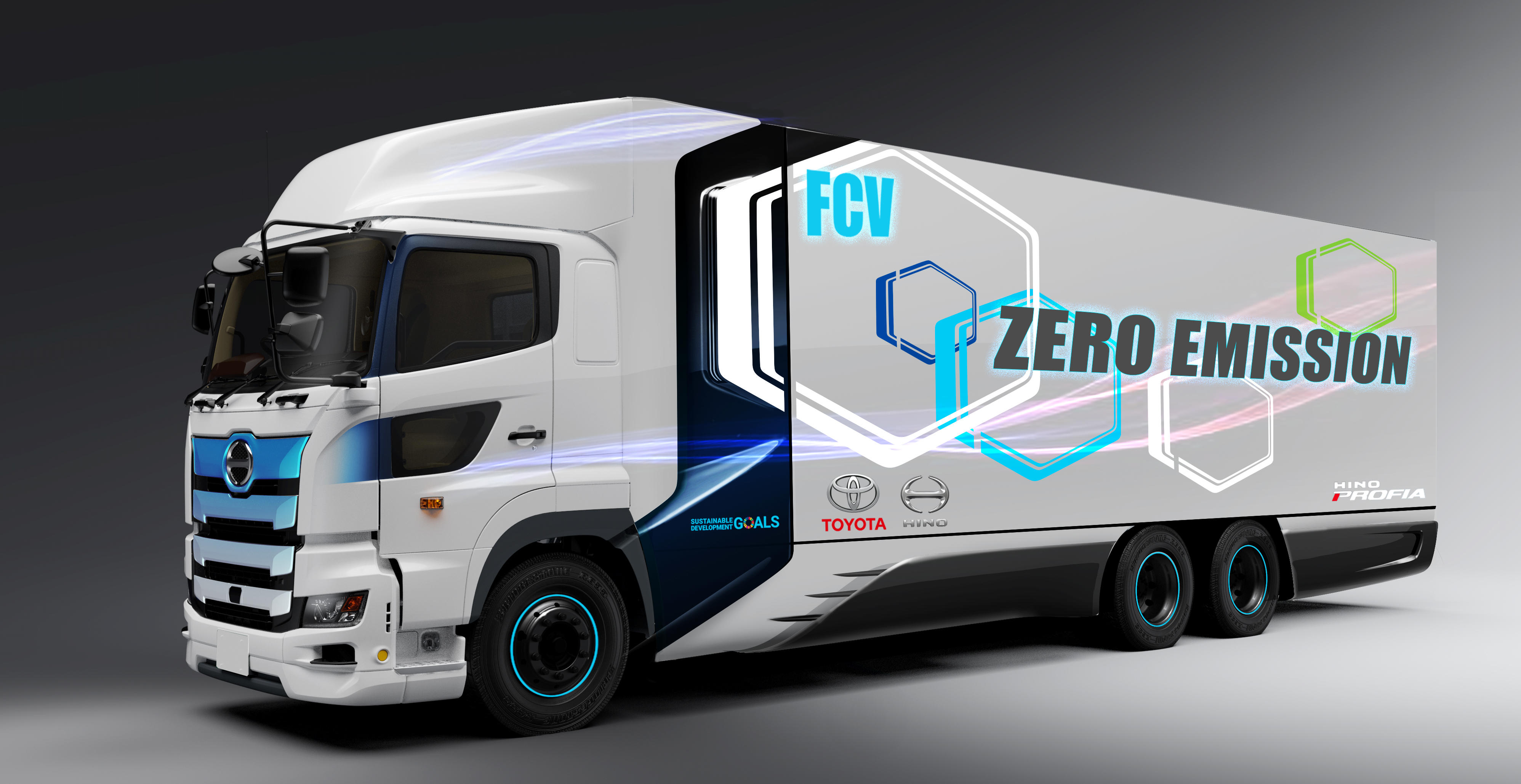 Toyota City, Japan, March 23, 2020―Toyota Motor Corporation (Toyota) and Hino Motors, Ltd. (Hino) have agreed to jointly develop a heavy-duty fuel cell truck, and to proceed with initiatives toward its practical use through verification tests and other means.