Stage9：Solemnly complete the grueling dune stage, finishing 16th in the SS and moving up to 15th overall in the cumulative ranking. 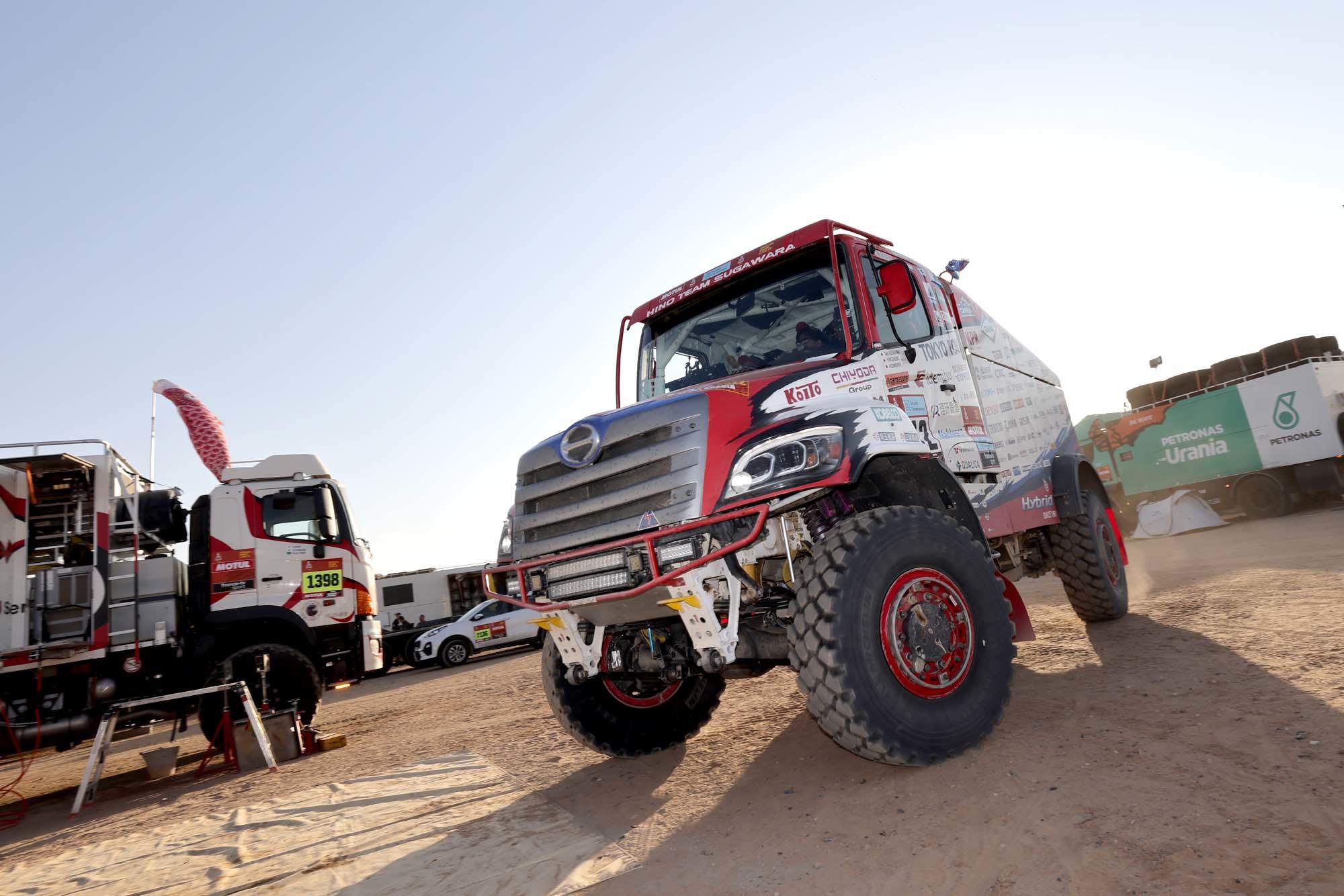 HINO 600 series arriving at the bivouac 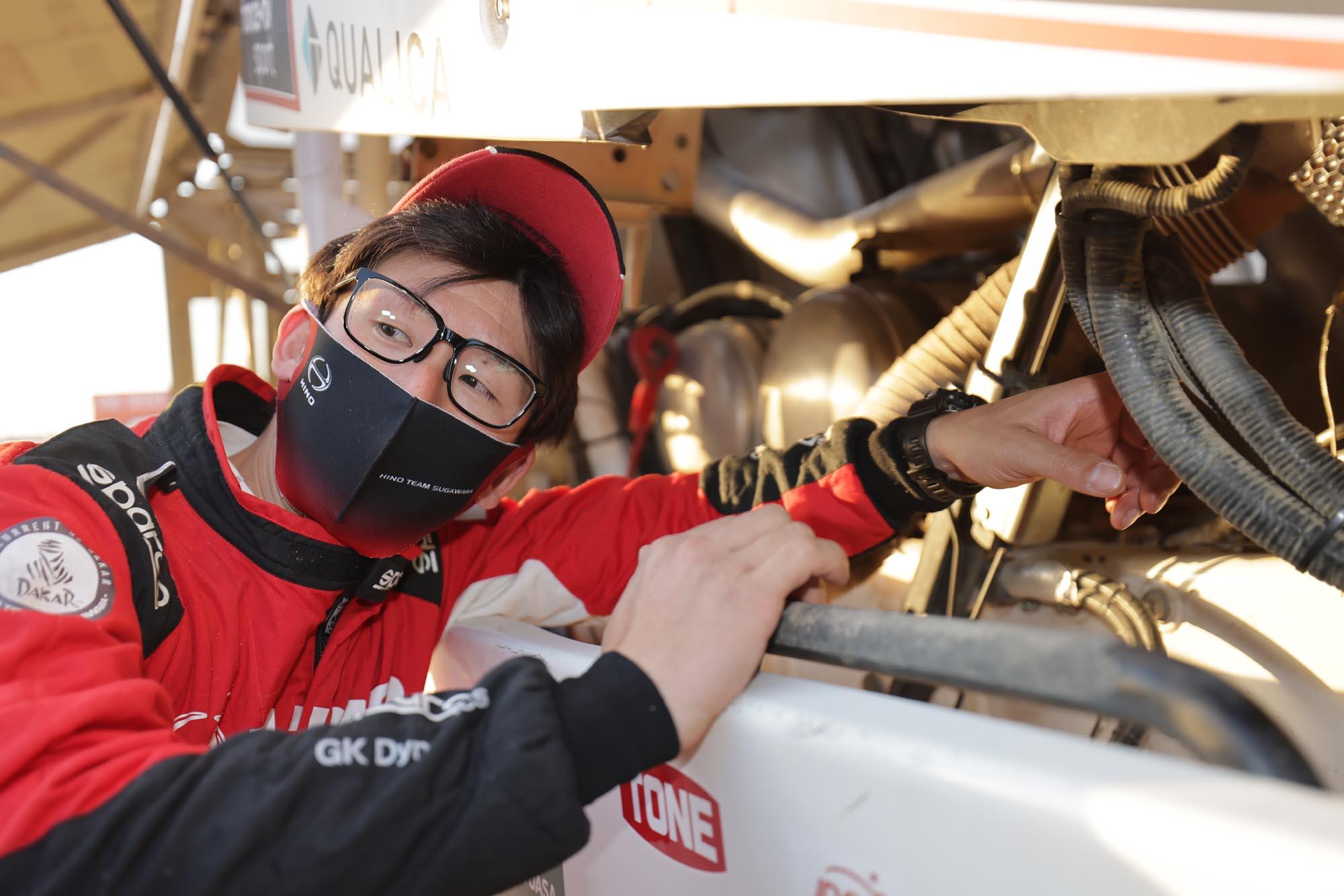 Stage 9 on the 11th was a loop course based in Wadi ad-Dawasir. The 286.96 km SS (competition segment) was held in the mountainous area to the west of the city where they arrived yesterday. The HINO 600 Series trucks of HINO TEAM SUGAWARA completed this course, which alternated between sections of soft sand and stony terrain, without any notable problems or mistakes. The team crossed the finish line at 16th place in the Trucks category, moving up to 15th place overall in the Trucks category.

The day began with a 93.29 km liaison from the bivouac, where the SS started on a sandy plateau, and the first part of the SS was a high-speed section through wide hills with multiple wheel tracks, but eventually the SS went through a narrow valley and into a dune area. Although not as difficult as the previous day, the sand was soft and the team had to be very careful not to get stuck. In the middle part of the route, the crew passed through a dusty wadi (dry river bed), and then the dune crossing appeared again. The last part of the course took them through sandy hills where they could ride at high speed to reach the goal. Then the team was back to the bivouac with a 110.96 km liaison northward.

The HINO 600 Series truck piloted by Teruhito Sugawara, Hirokazu Somiya, and Yuji Mochizuki had its turbocharger replaced at the bivouac last night. The problem of the turbocharger not being able to raise the boost pressure was resolved, and the truck ran smoothly through the SS. There was a section in the beginning where the navigation was difficult to understand, but they passed it without making any mistakes. The sand dunes that appeared several times were not too difficult, and the team made it to the finish line without getting stuck or having a flat tire. It was still light at around 4:30 pm when the vehicles returned to the bivouac in Wadi ad-Dawasir. The mechanics who were waiting for them immediately started their inspection work.

Dakar 2022 is now in its final stages, and on the 12th, the team will be heading north from Wadi Ad-Dawasir to Bisha, the final bivouac, where a 374 km SS is scheduled.

Today's course was not tricky or navigation made much of a difference. It was a good stage to test the capabilities of the vehicles. In that sense, I think our 16th place result is a clear indication of our current potential. The boost pressure issue has been resolved, but the engine seemed to be heavy somehow. Anyway, there are three more stages to go. We will continue to focus on the next three stages.

The navigator's seat, which has an exhaust pipe running right underneath it, gets very hot while driving. I had some work done on the air conditioning ducts last night and the seat is now much more comfortable. There were a few difficult parts to navigate, but I was able to clear them without any mistakes.

During the SS, it was difficult to adjust the CTIS (Centralized Tire Inflation System) due to the alternation of sand and hard surfaces, but I am glad that we were able to reach the goal without a flat tire. 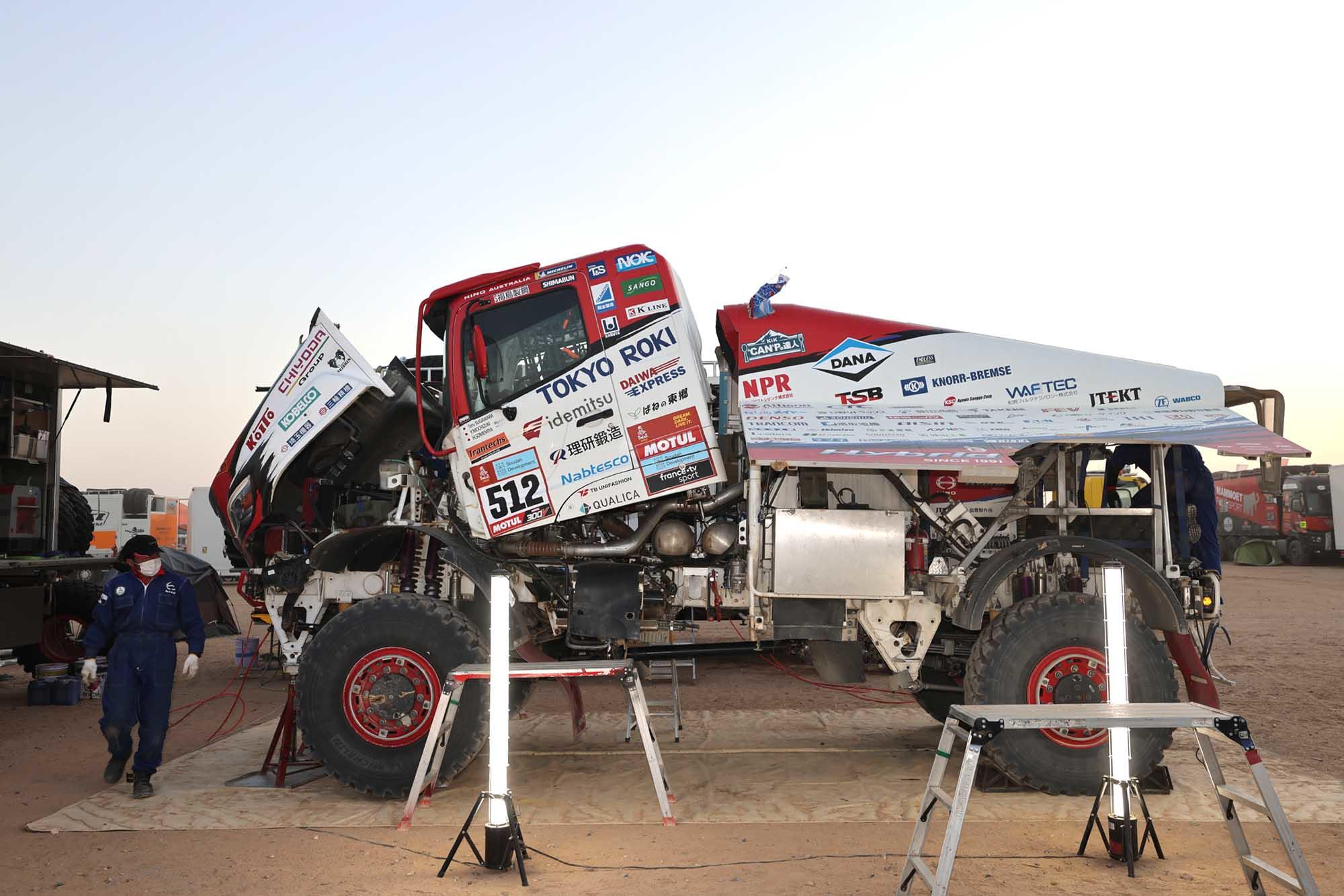 HINO 600 series during maintenance at the Wadi ad-Dawasir bivouac