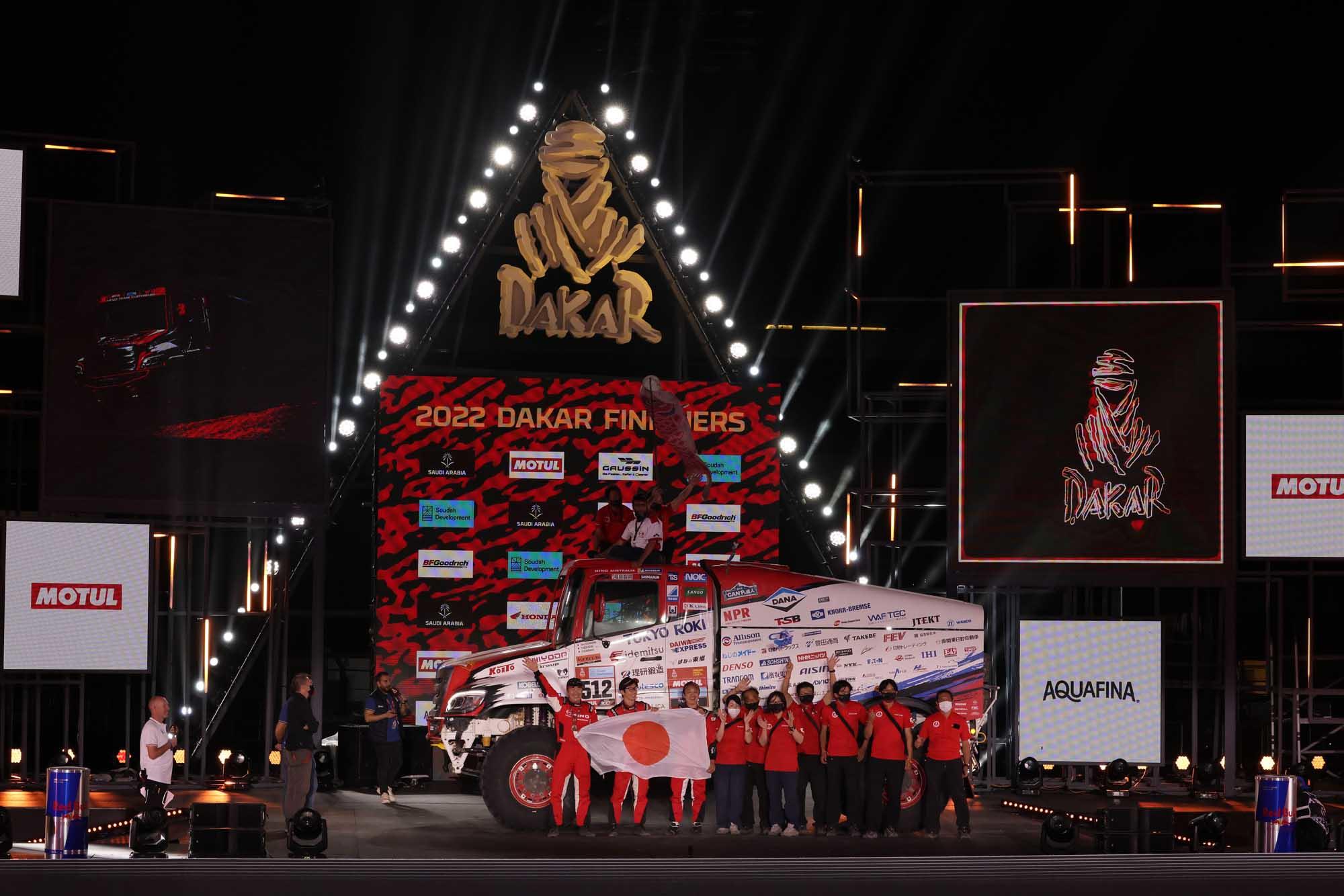 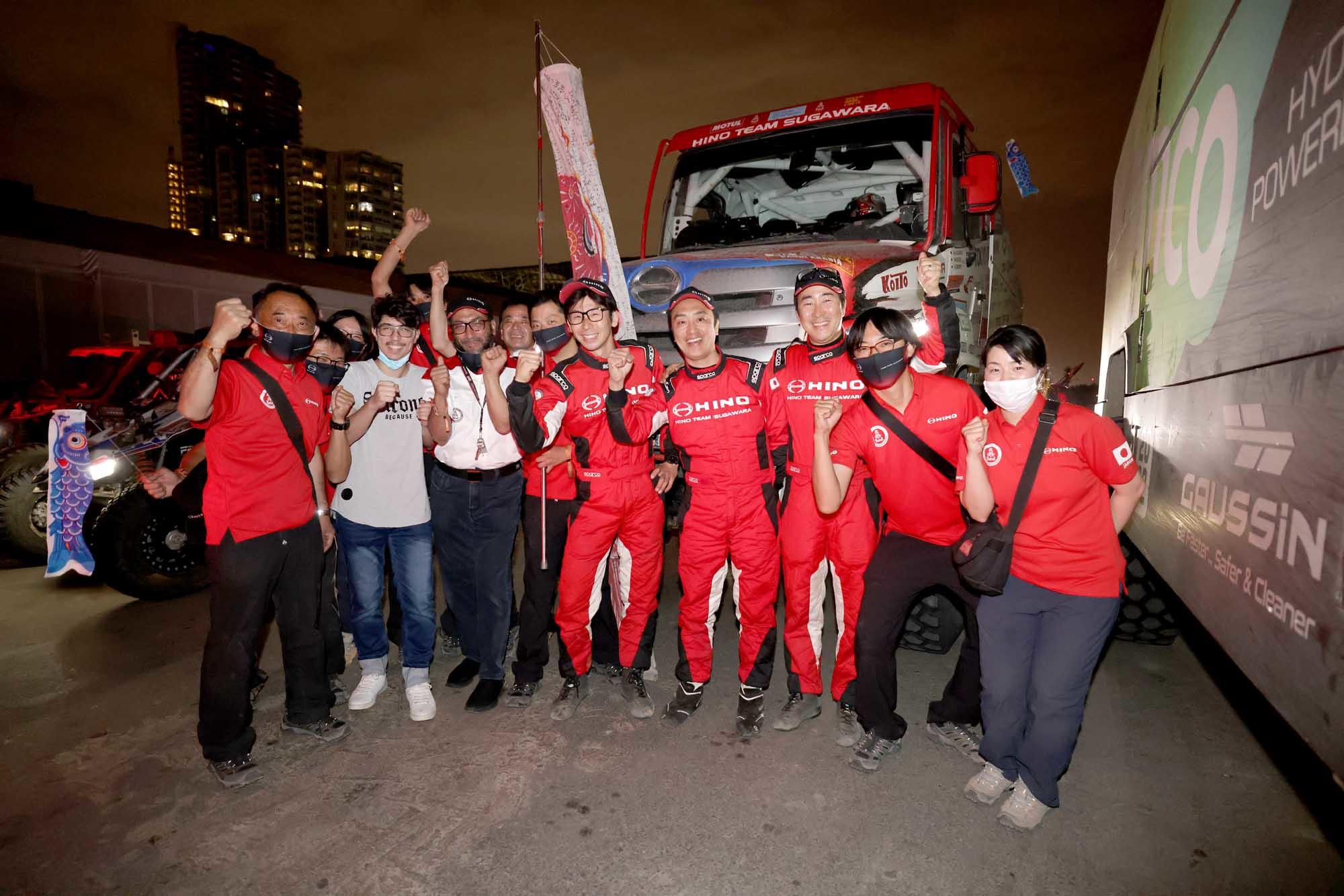 The Dakar 2022 reached its final goal in Jeddah on January 14th after the final stage 12 between Bisha and Jeddah in Saudi Arabia. A podium ceremony was held at the F1 circuit along the coast, bringing the curtain down on the 14-day competition.

The day started with a 230 km liaison from the Bisha bivouac to the north of Bisha, and the 166.57 km final SS was set in the mountains inland. In the beginning, the road surface was gravel (hard soil surface) that went over small mountains, but soon it turned into hills with many wheel tracks. This was a difficult section to navigate, as you had to find and trace the right wheel track while responding to the frequently changing cups (directions). Towards the end, the road surface became sandy, and we passed through soft wheel tracks and wadi (dry river bed) to the goal. After the SS, the contestants once again traveled the 286.26km liaison to reach the final goal in Jeddah.

The HINO 600 Series, which suffered from automatic transmission trouble during the competition yesterday, recovered by replacing the transmission at the bivouac in Bisha. Following the electrical trouble of the day before yesterday, the team lost a lot of time, but they focused on this final SS to finish the race in Jeddah by improving their position as much as possible. The HINO 600 Series, which had resolved the problems it had encountered yesterday, performed well and cleared the difficult navigation sections without making any mistakes, finishing in 15th place overall.

This year's finish line ceremony was held at the Jeddah Cornish Circuit, a tourist spot along the coast where the F1 GP was held for the first-time last fall. A large finish line podium was set up on the course, and all the vehicles that finished the race, including trucks, took the stage. The HINO Team arrived at the podium a little after 8 pm. Teruhito Sugawara, Hirokazu Somemiya, and Yuji Mochizuki, who took the stage in the Hino 600 Series with a large carp streamer attached on the roof, responded to the cheers of the crowd by waving their hands with the mechanics.

The vehicle equipped with the hybrid system was developed over a period of about two years, and it was a project that was supported by many people. We were not able to meet their expectations due to the troubles that occurred, but all of the problems we encountered cannot be confirmed until the actual rally. I believe that this result will lead to the future. It was tough because we had never had so many problems before, but I think it was tough on the mechanics too. I would like to thank them again.

I'm glad we managed to bring the truck back to the finish line. In yesterday's stage, we were penalized for not passing the waypoint and were placed in a different position, so I think this result is a fine finish.

We had various troubles throughout the competition, but thanks to them, I think I was able to function the best as a ride mechanic ever. This year was a year of challenges, so although we fell back in the rankings, what we gained was great. I am sure that I will be able to use this information for future development. On the other hand, the hood cab made the ride more comfortable and it was physically easier.

It was the first time for me to try a hybrid car and I had some trouble, but I'm glad I was able to make it work until the end. We were able to get some valuable data, and we hope to use it for the next race.

We had a lot of problems with the electrical system and with the automatic transmission in our second year, but I think it was good that we were able to get data on durability for the future.

Participating in a rally for the first time, I experienced the severity of the competition. I think our task now is to improve the reliability of our car manufacturing.

We had trouble not only with the hybrid but also with many other parts. Anyway, I think this was a competition that will lead to the next round.

We had a lot of trouble this time, but it was a useful experience for the next race. I hope this experience will lead to a better car in the future.

Every day was long. I think the burden on the field was greater than before. Anyway, I'm glad we could finish the race.

I was the driver of the assistant truck Hino ZS this time. I am glad that we arrived in Jeddah safely and without incident. Driving was a lot of fun.

This was my first attempt at a hybrid race, and I was worried about whether the team would be able to finish the race, but I was relieved when I saw that they made it to the finish line.

I am glad that we were able to operate safely as the driver of the assistance car. The mechanics had a lot of work to do this time, and I think it was hard work in the environment with the big difference in temperature. 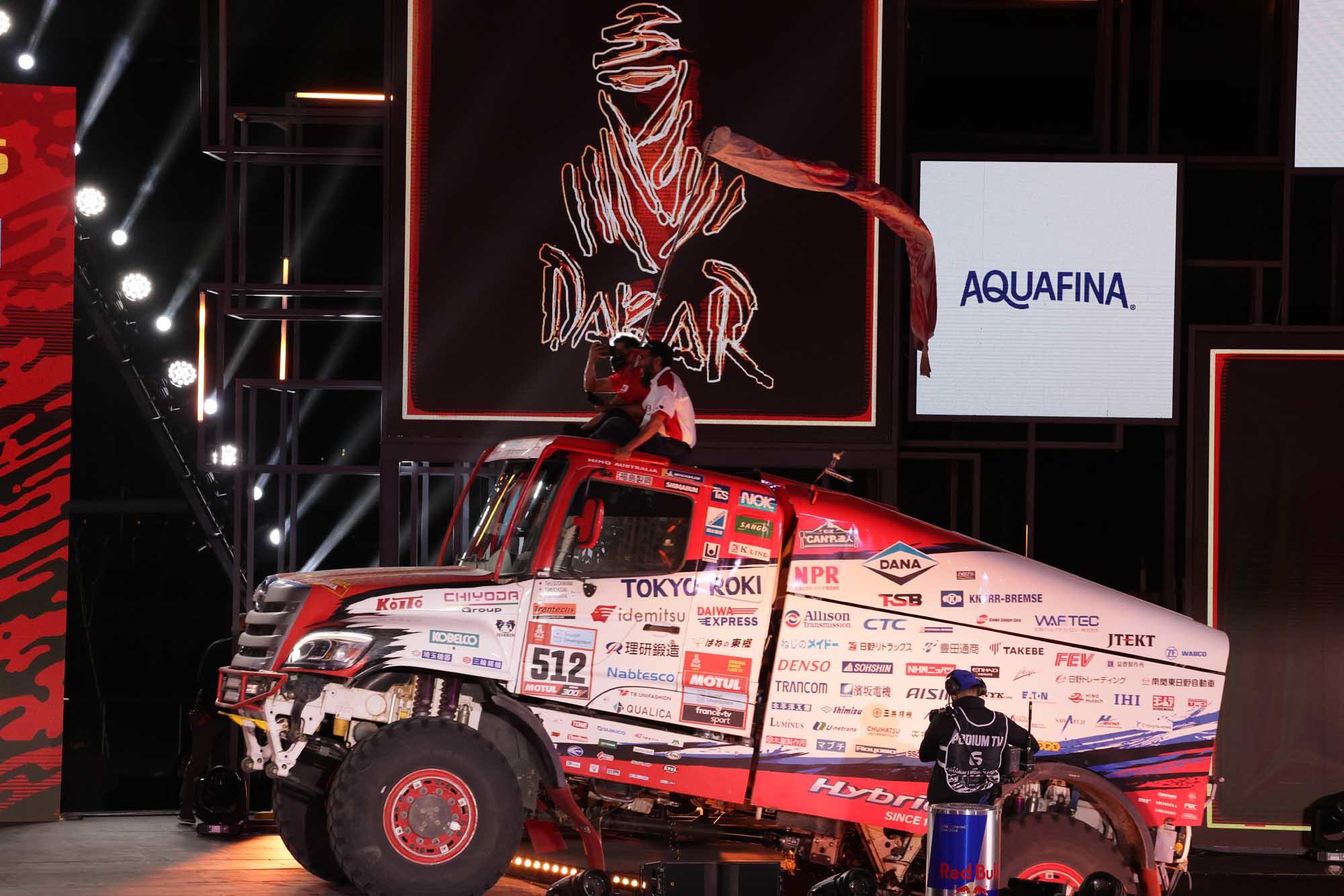 The HINO 600 Series on the podium with the mechanics on the roof. 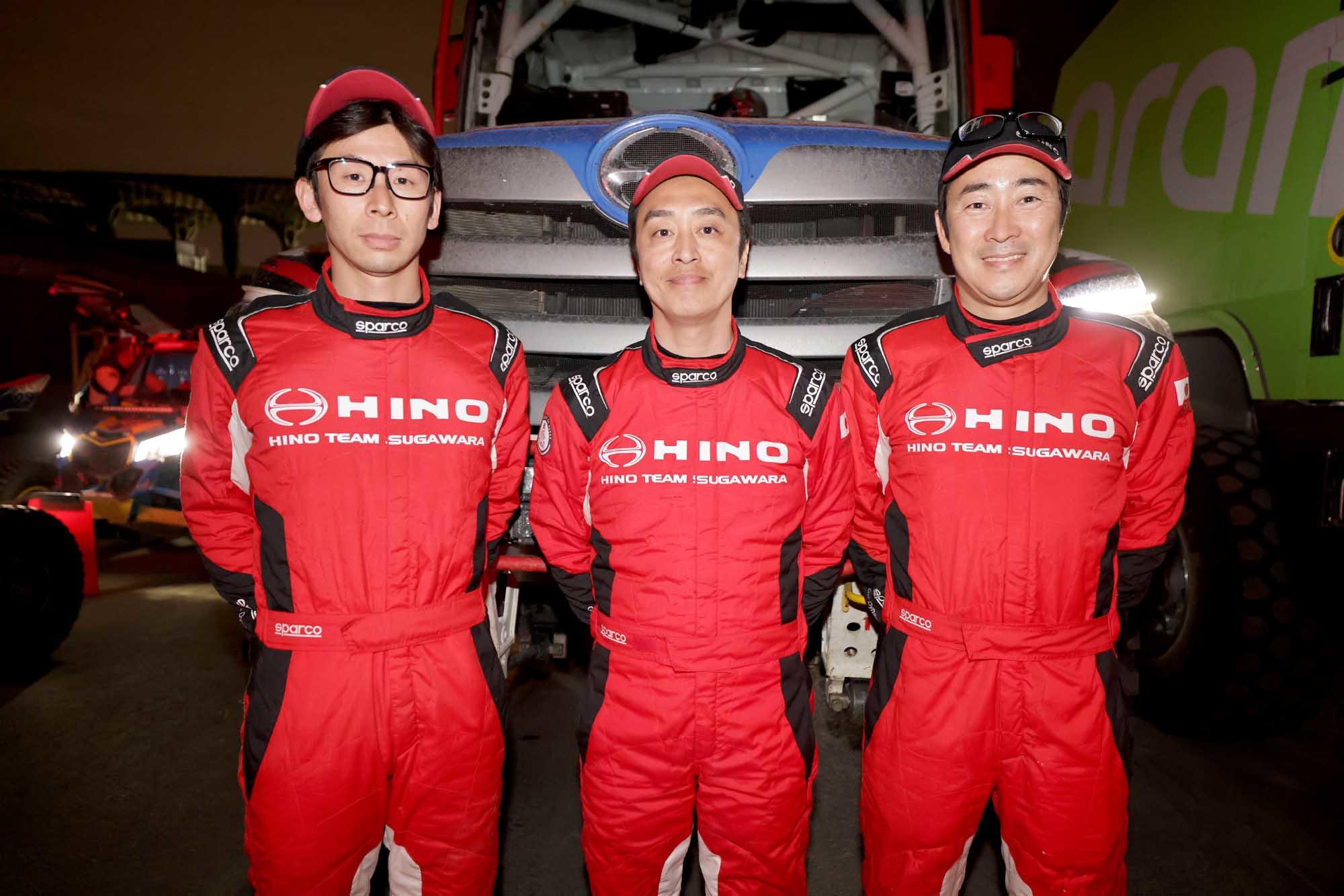 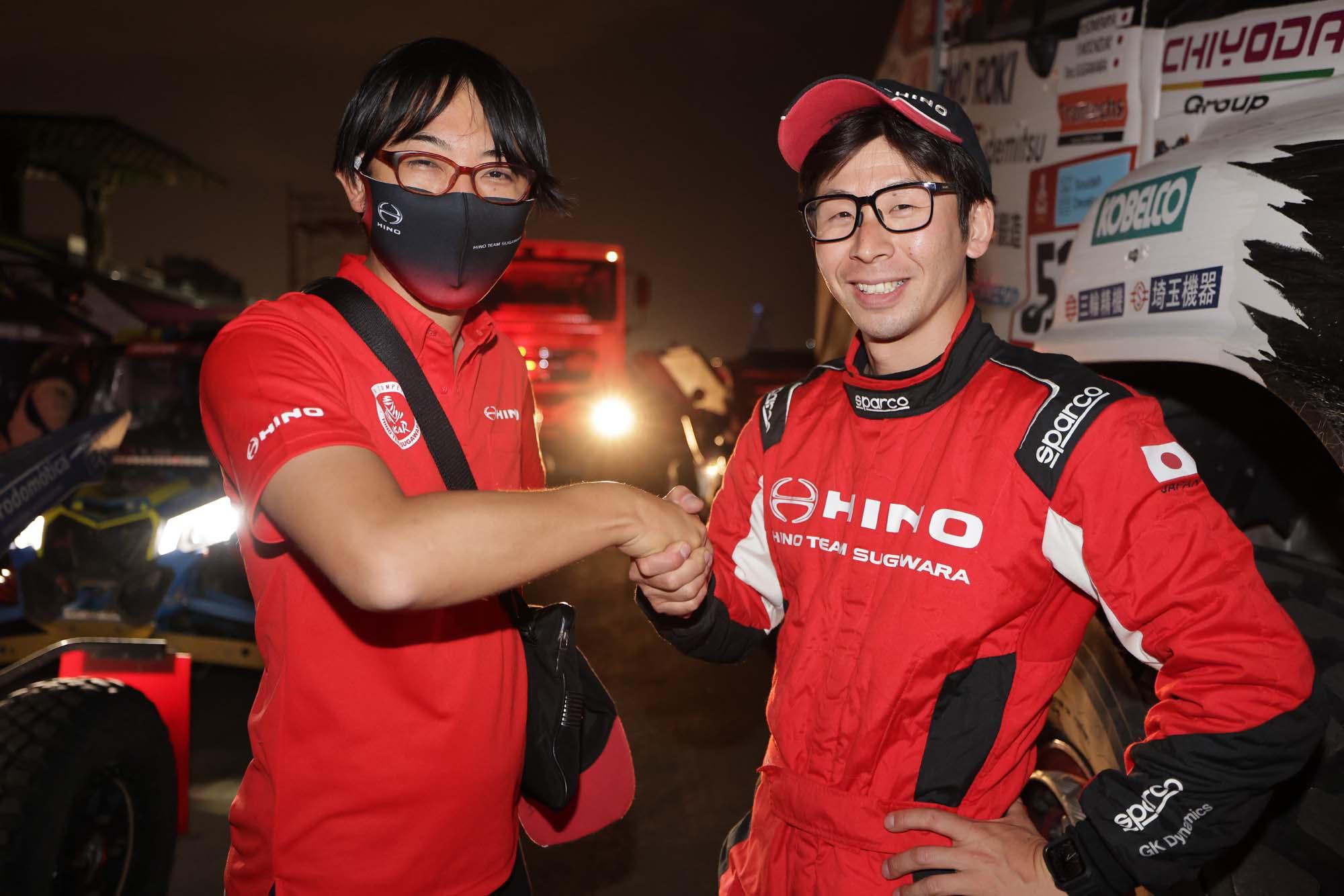