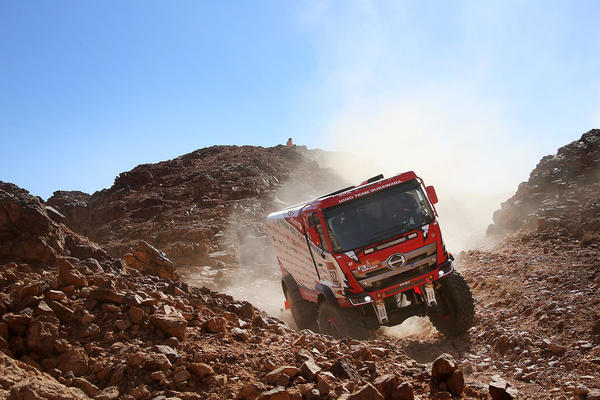 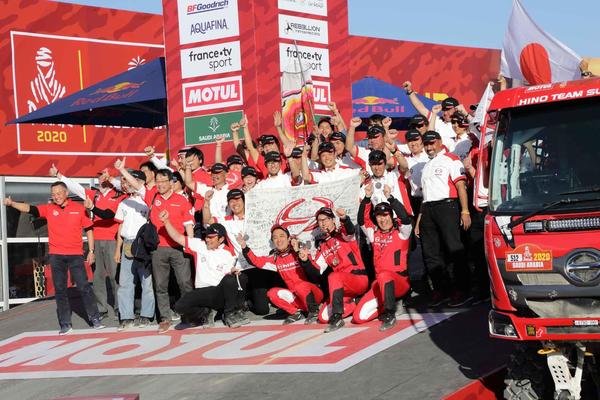 The team's Car 1 (HINO500 Series) crewed by Teruhito Sugawara/Hirokazu Somemiya/Yuji Mochizuki won the title in the Under 10-litre Class, extending its winning streak in the class to 11th for a team record. The truck also finished at 10th place in the overall trucks category which was dominated by large trucks with engine displacements in excess of 10-litres, extending its record of consecutive finishes in the overall top 10 to four. This event also witnessed the 29th consecutive finish for Hino since it first entered in 1991 as the first Japanese maker of commercial vehicles to start in the rally.

These records were the result of teamwork across the board that included the truck building and modifications performed by Hino engineers on their racing trucks, the outstanding driving skills and extensive rally experience displayed by Mr. Teruhito Sugawara, ironclad teamwork from the navigators, mechanics and support members of "HINO TEAM SUGAWARA", and the full support of Hino's Saudi distributor, Tsusho Jamjoom Trading Company (HQ: Jeddah, Saudi Arabia. President: Tsutomu Mori) and other associates.

・Teruhito Sugawara (Driver, Car 1)
"This was the first Dakar on Saudi Arabian soil. The levels of difficulty were not as high as we had thought and I think there were fewer opportunities for teams like us who were racing against the larger trucks on medium-sized trucks. I'm happy that we performed well even under these conditions to finish in the top 10 overall and extend our winning streak in our class. Our aim is to finish in the top 5 overall and I think we are on target as the upgrades we have been making on Car 1 showed in our solid performance and we were able to cut our time difference with the top racer to roughly half of what it was last year. We added one more crew member this year and raced with a three-person crew so the additional set of navigating eyes was a definite plus for me as a driver. We also punctured our tires three times and where we would've normally spent about 20 minutes on a tire change, we were able to cut our time down to about half that so that was another plus.
Our newly developed Car 2 had trouble early on, but thanks to our mechanics' efforts, we were fortunate enough to have the truck drive until stage 9 under the Dakar Experience program (excluded from awards). Thanks to both the data we were able to collect on the truck and the experience that the crew was able to rack up, I'm sure we will be able to build on this experience going forward."

・Hirokazu Somemiya (Navigator, Car 1)
"I'm very happy that I was able to contribute to our team's win. Since the race was being held in Saudi Arabia, I was thinking that we would be racing on dunes pretty much all the way, but we actually came up against a wide variety of road surfaces including rocky ground, mountain roads and rough terrain, all of which made this race that much tougher. We managed to finish the race thanks to support from not only our team members, but also our local associates in the country. Thank you all very much for your support."

・Yuji Mochizuki (Navigator, Car 1)
"These results came from all of us working as one coherent team and I am very happy with these results. I was on the team last year as a mechanic and this year as a navigator. The extreme conditions were of a different kind from last year. I feel kind of sad now that it's come to an end. I'm actually the first Hino employee navigator in 23 years to join the team and I'm very grateful for being given this opportunity to take on such a great challenge."

Car 2 (based on the HINO600 Series for the North American market) piloted by the Ikuo Hanawa/Yudai Hanawa/Mayumi Kezuka crew sustained damage to its rear body while racing in the early stage 2 (Jan 6) and did not start on stage 3 (Jan 7) so that the team could focus on repairs. The truck rejoined the event in stage 4 (Jan 8) under the "Dakar Experience" program for those who have been excluded from awards. But the truck suffered trouble again in stage 9 (Jan 14) -- A crack was found in the roll bar inside the cab, and the team decided to withdraw the truck as it was not possible to ensure the crew's safety.

・Ikuo Hanawa (Driver, Car 2)
"Car 2 that we entered in this rally was a newly developed truck. Trial-and-error and problems come with the territory and there are so many things that we can miss unless we actually race it. This was my first rally on a truck and we had to retire just when driving it was starting to get interesting. That was very disappointing, but I'm grateful for this great experience."

・Yudai Hanawa (Navigator, Car 2)
"This was my first Dakar Rally and my first experience on this truck. I was disappointed that we had to withdraw, but on a positive note, I really enjoyed driving through the rich variety of different types of roads."

・Mayumi Kezuka (Navigator, Car 2)
"I was on the support squad before I was given this opportunity to join the Dakar Rally team as a navigator. I was very disappointed that we had to withdraw, but we were able to identify the things that we need to work on with the truck and it's also been a great experience."

Hino is committed to build on the spirit of challenge and technological capabilities honed through these activities to develop "Trucks and buses that do more" as we aim to deliver products and services that benefit our customers.

Please visit our official website for more information on Hino Motors' participation in the Dakar Rally.

Image files included in this release are available for download. 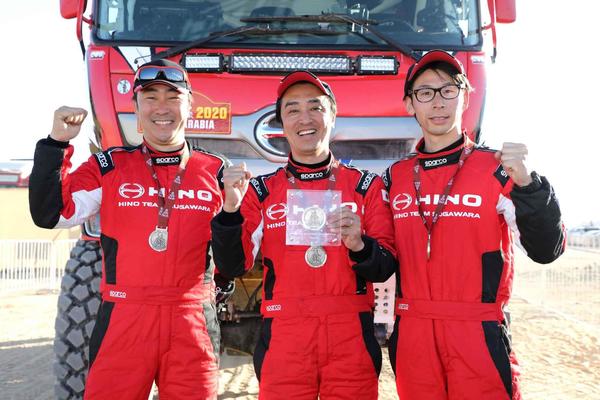 Car 1 and its crew extend their records (from left to right: Navigator Somemiya, Driver Sugawara, and Navigator Mochizuki) 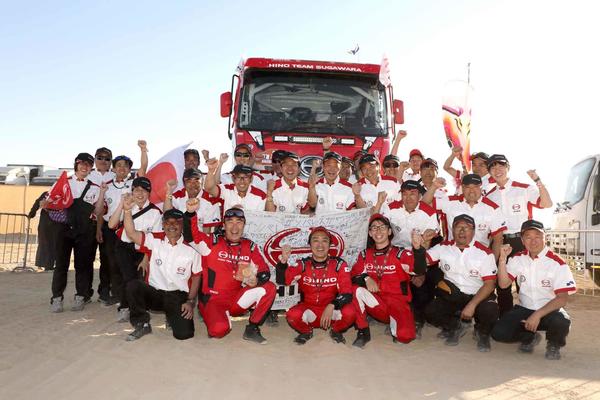 HINO TEAM SUGAWARA members celebrate as they flash the many messages of support that they received. 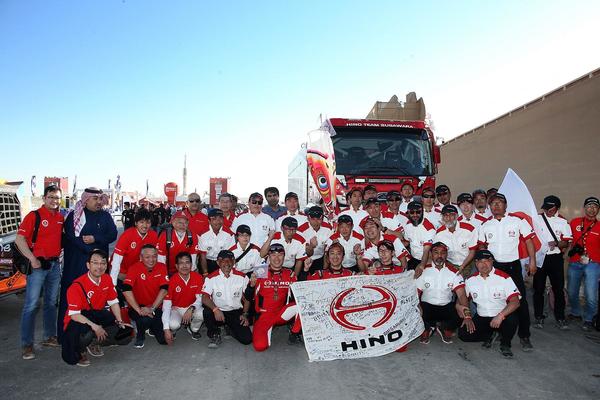